Artist painter, university teacher, professor of Visual Arts, director of the Department of Drawing, Painting, Sculpture and Visual Arts at Faculty of Architecture at University of Technology in Poznan.

‘Place and Time’ – are cycles of drawings and paintings, which have been creating for many years. They are expected to have character of never-ending plastic arts. Places, which are sphere, and time alternate with each other creating system for existence of mutual approximation and distance, encounters and separations, blooms and decays, the ups and downs. The diversity of not only my personal experiences of place and time is somehow endless in its qualities and kinds.

Observation of peculiar dichotomy of existence, continuously changeable process of existence and constant character of necessity is my emotional truth, form of expression of which is a painting or drawing.

Time passes – day comes after night, night after day, seasons pass, ages pass. Primarily we are changing inside us. However, I feel that there are such states of mind and body which existed yesterday and will exist tomorrow. Some of them have cyclic some irreversible character.

In my field of observation appear many kinds of pictures of physical visions (phenomena) in various states and shapes. They exist with their temperature, smell, taste, being described by different values of light and sounds.

The overall structure common for all times, that has been formed and transformed by developing civilization is our world, our reality.

In this reality as a part of it – its complement, my, our life exists in macro as well as micro worlds: family, home, close friends, acquaintances, work. Each element that creates present reality has influence on sequence of events, those that are assumed to be consequences of something and those rationally unpredictable, has influence on evolution of consciousness and its level.

Experienced events are proof of my existence, history of place and time. They describe the character of attitude towards new quality, simultaneously giving the signal to create idea – picture.

A place of one’s own 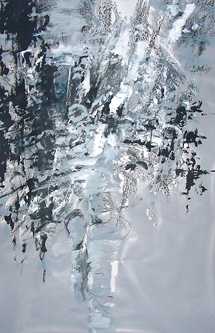 As a painter, the Author consequently retains identity. His works, from the very earliest, prove this without a shade of doubt. The works (both the ones created out of choice, and the ones created out of a bio-psychological necessity) were realized in the world of organic forms – in the stream of the informel painting, named so by the French painter and critic Michel Tapié (ca. 1950).

I would like to emphasize that I myself find in many of the Author’s paintings the same community and love – the same passions of the will to paint, and the spirit, which as if burst in the works of the action painting artists – such as the great Willem de Kooning. If I continue to compare the Author with other painters, I am doing so to create grounds for better understanding. For this reason, I am mentioning also the names of Henri Michaux (École de Paris), Philip Guston (action painting U.S.), Nicolas de Staël (École de Paris) – and I am doing so because of the Author’s attempt to compromise within the work the reality of what is seen in the world, with abstract painting. It needs to be explained further, that it is all about creative goals, intentions, as both formally and in terms of craft, the painting of both authors differ completely.

2. The question of choice.

The Author says: “as a human being, and an artist, I am often faced with a choice I need to make. Every day is a question of choice.” But the Author’s life is a life among art – for art, and thus the most important choice of all was this: organic art – not solely as rejection of the former rules of composition – but also as a work of spontaneous art, originating in the inner imaginings of the Author, as a piece which retains events and ‘sights’ of the world and people important in the Artist’s own life.

prof. Zdzisław Jurkiewicz
Department of Drawing, Painting and Sculpture
Of the Wroclaw University of Technology

A graduate of University of Fine Arts in Poznan

University teacher of Drawing, Painting, and Sculpture Studio at University of Technology in Poznan

Director of the Department of Drawing, Painting, Sculpture and Visual Arts – Faculty of Architecture at University of Technology in Poznan